First Steps with Python and Jupyter

Part 1 of "A Gentle Introduction to Programming with Python"

This tutorial is the first in a series of beginner-friendly tutorials on programming using the Python language. These tutorials take a practical coding-based approach, and the best way to learn the material is to execute the code and experiment with the examples. Check out the full series here:

The following topics are covered in this tutorial:

This tutorial is an executable Jupyter notebook hosted on Jovian.ml, a platform for sharing data science projects online (don't worry if these terms seem unfamiliar, we'll learn more about them soon). You can "run" this tutorial and experiment with the code examples in a couple of ways: using free online resources (recommended) or on your own computer.

The easiest way to start executing this notebook is to click the "Run" button at the top of this page, and select "Run on Binder". This will run the notebook on mybinder.org, a free online service for running Jupyter notebooks. You can also select "Run on Colab" or "Run on Kaggle", but you'll need to create an account on Google Colab or Kaggle to use these platforms.

To run this notebook on your computer locally, you'll need to set up Python and download the notebook. We recommend using the Conda distribution of Python. Here's what you need to do to get started:

You'll need to create the environment only once, but you'll have to activate it every time want to run the notebook. When the environment is activated, you should be able to see a prefix (intro-to-python) within your terminal or command prompt.

The notebook is downloaded to the directory first-steps-with-python. You can also use the "Download Zip" option on the page instead of using the jovian clone command.

Jupyter Notebooks: This tutorial is a Jupyter notebook - a document made of "cells", which can contain explanations in text or code written in Python. Code cells can be executed and their outputs e.g. numbers, messages, graphs, tables, files etc. can be viewed within the notebook, which makes it a really powerful platform for experimentation and analysis. Don't afraid to experiment with the code & break things - you'll learn a lot by encoutering and fixing errors. You can use the "Kernel > Restart & Clear Output" menu option to clear all outputs and start again from the top of the notebook.

Let's begin by using Python as a calculator. You can write and execute Python using a code cell within Jupyter.

Run the code cells below to perform calculations and view their result. Try changing the numbers and run the changed cells again to see updated results. Can you guess what the //, % and ** operators are used for?

As you might expect, certain operators like / and * take precendence over other operators like + and - as per mathematical conventions. You can use parantheses i.e. ( and ) to specify the order in which operations are performed.

Try solving some simple problems from this page: https://www.math-only-math.com/worksheet-on-word-problems-on-four-operations.html . You can use the empty cells below and add more cells if required.

We can list out the information provided, and gradually convert the word problem into a mathematical expression which can be evaluated using Python.

Thus, the grocery store makes a total profit of $125.0 . While this is a reasonable way to solve a problem, it's not quite clear by looking at the code cell what the numbers represent. We can give names to each of the numbers by creating Python variables.

Variables: While working with a programming language such as Python, informations is stored in variables. You can think of variables as containers for storing data. The data stored within a variable is called it's value.

The variables cost_of_ice_bag, profit_margin and number_of_bags now contain the information provided in the word problem. We can check the value of a variable by typing its name into a cell, and we can combine variables using arithmetic operations to create other variables.

If you try to see the value of a variable that has not been defined i.e. given a value using the assignment statement variable_name = value, then Python shows an error.

Storing and manipulating data using appropriately named variables is a great way to explain what your code does.

Let's display the result of the word problem using a friendly message. We can do this using the print function.

Functions: A function is a reusable set of instructions. A function takes one or more inputs, performs certain operations, and often returns an output. Python provides many in-built functions like print, and also allows us to define our own functions.

print: The print function is used to display information. It takes one or more inputs which can be text (within quotes e.g. "this is some text"), numbers, variables, mathematical expressions etc. We'll learn more about variables & functions in the next section.

Creating a code cell for each variable or mathematical operation can get tedious. Fortunately, Jupyter allows you write multiple lines of code within a single code cell. Let's rewrite the solution to our word problem within a single cell.

Note that we're using the # character to add comments within our code.

Comments: Comments and blank lines are ignored during execution, but they are useful for providing information to other humans (including yourself) about what the code does. Comments can be inline (at the end of some code), on a separate line, or even span multiple lines.

Inline and single line comments start with #, whereas multi-line comments begin and end with three quotes i.e """. Here are some examples of code comments:

Just like arithmetic operations, the result of a comparison opration can also be stored in a variable.

The logical operators and, or and not operate upon conditions and True & False values (also known as booleans). and and or operate on two conditions, whereas not operates on a single condition.

The and operator returns True when both the conditions evalute to True. Otherwise it returns False.

The or operator returns True if at least one of the conditions evalute to True. It returns False only if both conditions are False.

Logical operators can be combined to form complex conditions. Use round brackets or parantheses ( and ) to indicate the order in which logical operators should be applied.

If parantheses are not used, logical operators are applied from left to right.

Experiment with arithmetic, conditional and logical operators in Python using the interactive nature of Jupyter notebook. We will learn more about variables and functions in future tutorials.

Adding explanations using text cells (like this one) is great way to make your notebook informative for other readers, and for yourself, if you need to refer back to it in the future. Double click on a text cell within Jupyter to edit it. In the edit mode, you'll notice that the text looks a little different (for instance the heading has a ## prefix. This text is writted using Markdown, a simple way to add styles to your text. Execute this cell to see the output without the special characters. You can switch back and forth between the source and the output to see how to create a specific style.

For, instance, you can use one or more # characters at the start of a line to create headers of different sizes:

To create a bulleted or numbered list, simply start a line with * or 1..

Another really nice feature of Markdown is ability to include blocks of code. Note that code blocks inside Markdown cells cannot be executed.

You can learn the full syntax of Markdown here: https://learnxinyminutes.com/docs/markdown/

Save and upload your notebook

Whether you're running this Jupyter notebook on an online service like Binder or on your local machine, it's important to save your work from time, so that you can access it later, or share it online. You can upload this notebook to your Jovian.ml account using the jovian Python library.

First, you need to install the Jovian python library, if it isn't already installed.

Next, the library needs to be imported.

Finally, you can run jovian.commit to capture and upload a snapshot of the notebook.

The first time you run jovian.commit, you'll be asked to provide an API Key, to securely upload the notebook to your Jovian.ml account. You can get the API key from your Jovian.ml profile page after logging in / signing up.

jovian.commit uploads the notebook to your Jovian.ml account, captures the Python environment and creates a shareable link for your notebook as shown above. You can use this link to share your work and let anyone (including you) run your notebooks and reproduce your work. Jovian also includes a powerful commenting interface, so you can discuss & comment on specific parts of your notebook: 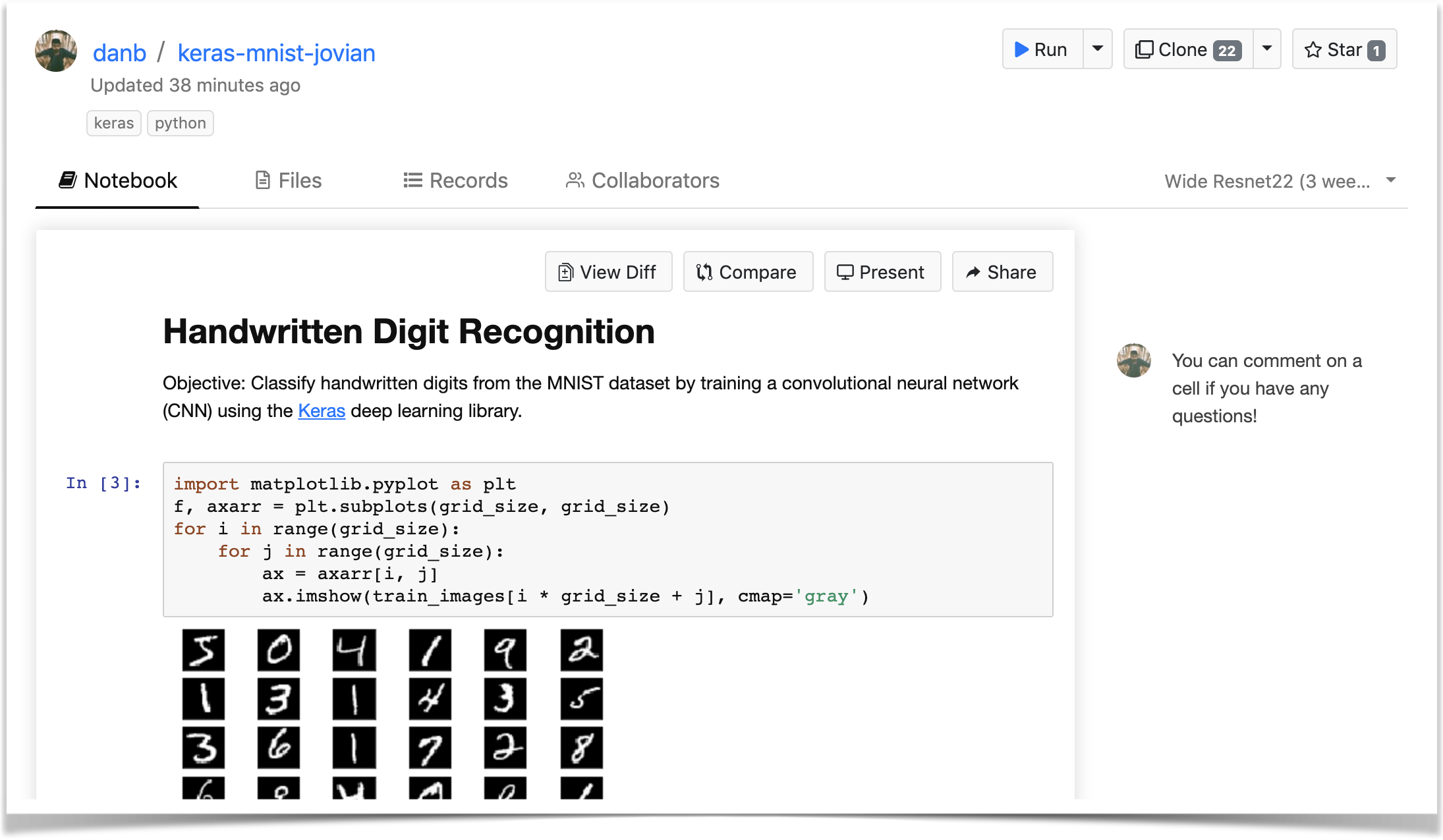 You can do a lot more with the jovian Python library. Visit the documentation site to learn more: https://jovian.ml/docs/index.html

Following are some resources to learn about more arithmetic, conditional and logical operations in Python:

Now that you have taken your first steps with Python, you are ready to move on to the next tutorial: "A Quick Tour of Variables and Data Types in Python".